Rolling Ahead in a High-Growth Environment 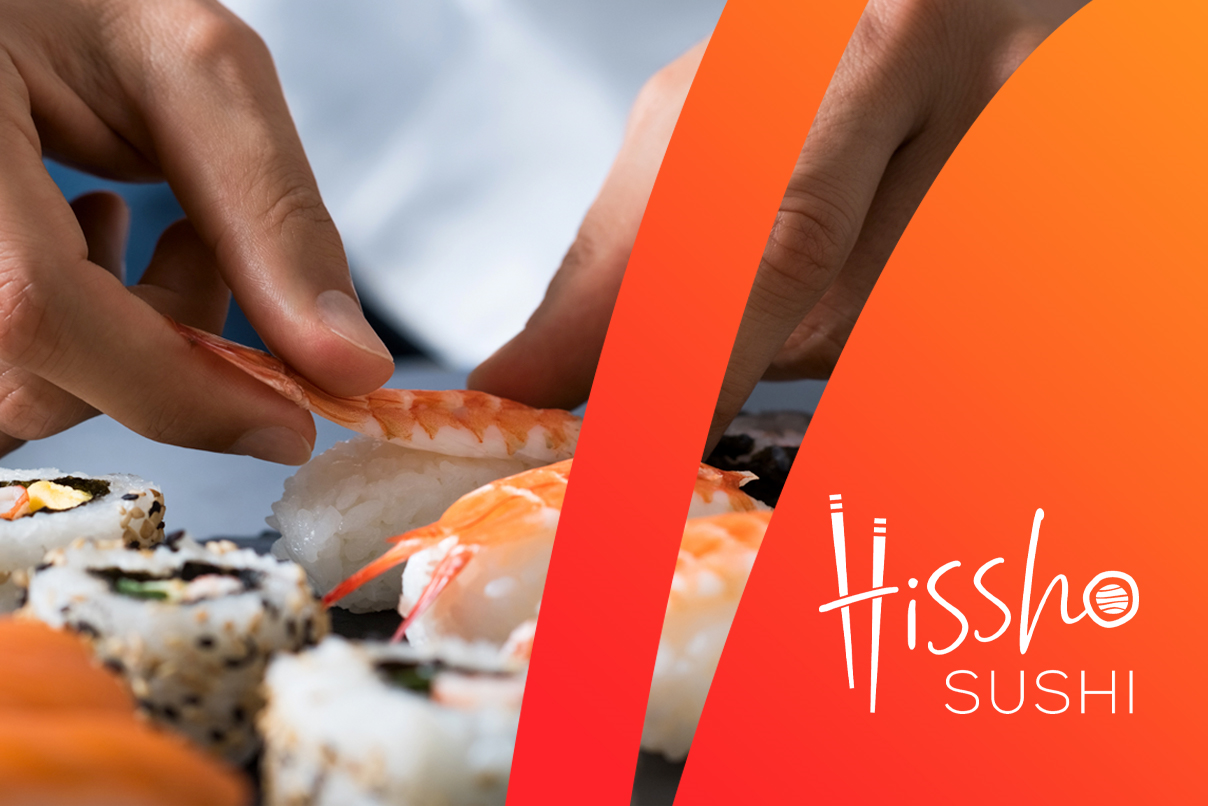 In 1989, Philip Maung arrived in America from Burma with $13 and a whole lot of ambition. After stints working at gas stations and in real estate, he found his calling in the sushi distribution business and spent the next several years learning every facet of it. By 1998, Maung and his wife Kristina had pooled their finances to form Hissho Sushi in Charlotte, North Carolina. Working out of their kitchen, the couple provided fresh sushi daily for resale at supermarkets and cafes in the region. Maung sold majority ownership in 2016 and, in 2017, Dan Beem, former President of the International Division for Krispy Kreme, joined the Hissho Tribe as CEO.

Penny Kirsch, Director of Human Resources, joined the company in 2010 as the HR manager. She has experienced the company’s dramatic expansion firsthand.

“High growth is great for job security in HR, but it’s really tough on processes and systems like payroll, benefits and performance management,” said Kirsch. “Retaining the right parts of the company culture is also really important. We still want to be that company our employees really enjoy being a part of, even if our growth requires us to change how we operate.”

Hissho’s value proposition centers around equipping supermarkets, cafés and other businesses and venues to offer fresh, high-quality sushi without taking on the overhead and risk that comes with it. This requires employing hundreds of remote W-2 hourly employees — many of them sushi chefs — who set up shop making and selling fresh sushi in those locations.

As the company continued to grow, payroll processing became a huge challenge. In addition to employees at its headquarters, each remote employee needed to fill out a daily timecard that needed manager approval before it was sent to headquarters in Charlotte where it was manually keyed into the company’s third-party payroll system. These extra steps required valuable time for multiple people and were fraught with the potential for error.

Kirsch switched payroll management solutions twice to address the company’s changing needs, but both times, the company ran into problems — lack of product functionality and poor service levels. One of the biggest challenges was managing the payroll and benefits administration requirements of the growing number of sushi chefs working remotely.

In late 2016, Kirsch and her team set out to find a new payroll and HR solution and met Paylocity. One capability, in particular, stood out — the ability to geofence each of Hissho’s remote "store" locations so that payroll time reporting and approvals could be handled simply and accurately. At the time, Paylocity was the only company to offer it. The level of innovation gave Kirsch the confidence that, unlike the other options she was considering, Paylocity had the vision and ability to always stay a step ahead of Hissho’s needs.

Kirsch had three main priorities to start: employee onboarding, time reporting and recruiting. Streamlining these processes was vital because it directly impacted Hissho’s growth potential and its ability to provide employees with a great experience. Kirsch understood that these things started before employees ever clocked in.

Hissho was up and running on Paylocity’s HR and Payroll solution in early 2017. The first step was to onboard employees. Kirsch had already started online onboarding with Hissho’s previous payroll solution, so it was important that Paylocity could do that as well and make the transition seamless.

With a heavily remote staff, the current paper-based time reporting had to go. Each payroll run took two full days to collect timesheets and enter the information. It was a huge burden for her team, and it prevented them from focusing on more important things related to the company’s growth and culture, such as recruiting and employee development.

As part of its Time & Labor module, Paylocity geofenced over 180 "stores," enabling remote employees to securely clock in and out via a preconfigured tablet or their own mobile devices. The system requires employees to be at the store location, ensuring more accurate time reporting and easier manager approvals. Employee hours are then automatically uploaded into the payroll system. Paylocity’s Mobile App also gives employees the ability to easily check their hours and request time off.

As part of the rollout, Paylocity trained all the Hissho regional managers across the country on how to utilize the system. Kirsch understood that moving from Hissho’s paper-based payroll system to Paylocity’s digital approach would require change for employees. Many of the sushi chefs were also not proficient in English or on the computer. Strong training from Paylocity was key to enabling the regional managers to help the sushi chefs adjust to the new system and reinforce its use, which resulted in 100% adoption and compliance.

Moving to Paylocity alleviated a lot of pressure for Kirsch and her team. “It streamlined the entire process,” she says. “What used to take two full days now takes less than half a day. Managing PTO through Paylocity also saved a lot of trouble with tracking and manager approvals.”

Recruiting was and continues to be a big priority for Hissho, so Kirsch, with the help of Sr. Employee Relations Manager, also deployed Paylocity’s Recruiting module. This accelerates the entire process from job postings and candidate applications through background checks, offer letters, and onboarding. All key candidate data is stored in Paylocity’s connected system, allowing for easy onboarding to flow seamlessly once a candidate is hired. As a result, Kirsch and her team are able to focus more time on finding the right talent for Hissho and less on managing the administrative part of the recruiting process.

What's Best for the Customer

One thing Kirsch really appreciates about Paylocity is its approach to service—always doing what’s best for the customer—whether it’s product, integration, or people.

“We discussed Paylocity’s health care benefits module, but we didn’t really have the budget for it. So Paylocity helped us find the right solution for our needs and budget requirements, even though it wasn’t their product. That was really above and beyond.”

“I've used several hr and payroll solutions and Paylocity far exceeds their competitors. The company is really innovative and always stays one step ahead. The system offers so much.

Paylocity’s approach to integration is similarly customer-friendly. Kirsch wanted the flexibility to use the systems that were best for Hissho and not be limited in her choices based on another solution’s integration limitations. With Paylocity, she sees no obstacles. In early 2019, Hissho changed its 401(k) third-party benefits administrator (TPA) and completed a 360-degree integration with Paylocity (meaning data flowed both ways between systems). This saved a significant amount of time by automating updates between Paylocity and the TPA related to plan participation, contribution changes, and deferrals.

Two other integrations are also proving to be big-time savers. One is between Paylocity and Hissho’s workers’ compensation insurance provider, Interlinks/Travelers. Getting this right was essential from a compliance perspective. Another is integration with Hissho’s health care benefits solution, Employee Navigator. Hissho employees can now complete their enrollments online and, every two weeks, employee info goes directly through another 360-degree feed to Employee Navigator.

Kirsch also reports that Paylocity is responsive to her ongoing needs. “We’ve requested some personnel changes on our account and it was done promptly and without fanfare. The switch was seamless.”

A More Strategic Role for HR

Kirsch and her team are no longer playing the role of middleman for employee services. There are no more paperbased time sheets, manual data entry or 401(k) rollups. The workers’ comp integration saves a ton of time and surprises when they get audited. Instead, they are able to focus their time on more strategic efforts to support Hissho’s growth and ‘work hard/play hard’ culture. This includes expanding employee development efforts, implementing effective immersion programs for new employees, and creating feedback loops to help monitor and balance the impact of the company’s growth on Hissho’s work environment.

“I don’t have a lot of detailed numbers, but I can say without question that Paylocity has had a huge positive impact for Hissho,” said Kirsch. “The system has saved us a ton of time and really paid for itself in more accurate time reporting alone. More importantly though, it has freed up people to focus on higher-value activities—whether that’s HR program development, supervisors training employees, or sushi chefs thinking about new and more interesting menu offerings.”

In late 2019, Kirsch also piloted Paylocity’s Performance Review & Journaling module in two departments. This helps managers engage staff and provide productive development feedback on a regular basis while streamlining the performance management process for both managers and employees. Kirsch believes this will also provide more insight into the company culture and enhance the employee experience and culture at Hissho overall.

Hissho also deployed Paylocity’s Data Insights module. Kirsch uses it as a core part of her executive team meetings to provide the latest data and trends on payroll, benefits costs, retention, turnover and hiring. This, combined with regular dialogue with managers and employees, enables the executive team to make more informed decisions related to company culture and ensures that Hissho remains a fun and attractive place to work and build a career—now and in the future.